Do you like Milton Keynes? Then you’ll love Belarus.

The name means white Russia, and that’s a fairly decent description of a country that can be readily likened to an 80s version of Russia. We were not expecting to see a modern European capital, and we were not disappointed: Minsk is a proper old-school Soviet megacity, housing two million people, only a handful of tourists and, most amazingly of all, the crystal dome! 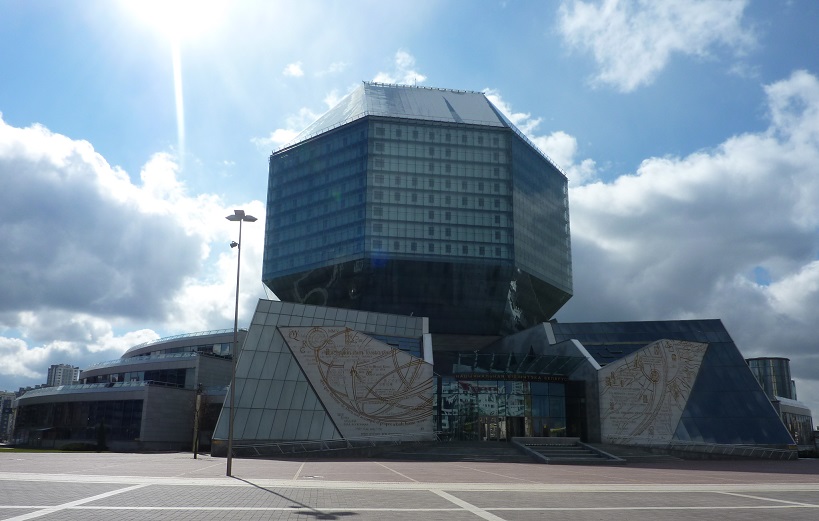 For those of us who think that Telford has something magical about it, this is a must-see attraction. I have no idea what the architect was thinking here, but presumably he had either played Sim City 2000 or watched The Crystal Maze as a child. Anyway, this monument to the glory of the future is actually a library, although it doesn’t appear to be used by anyone and when we tried to go in for a look around we got shouted at by a security guard and ordered out. And this was just the beginning.

It turns out that nobody is permitted to photograph any government buildings in Belarus, and if you do, then the police will make you delete your photos, or worse. That sounds like a challenge to us! So, here’s the houses of parliament, complete with obligatory Lenin statue.

For balance, and for fear of the literally thousands of military police and KGB that patrol every street of this place, here is a photo that tourists are encouraged to take: victory monument, near Gorky Park. 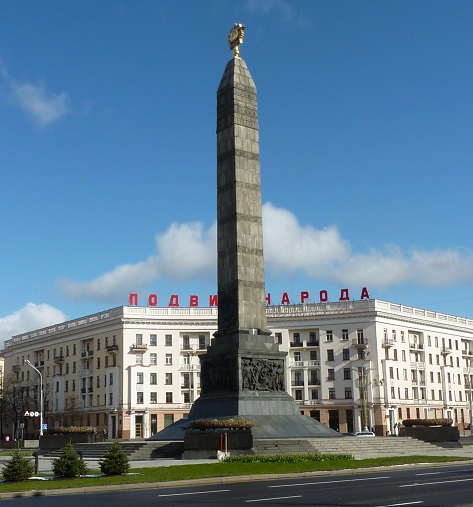 Our propaganda operative tour guide gave us some facts about Belarus:

Thanks for the insight. Yes, it sure is wide. A rather strange boast, but Minsk is proud of having several streets whose width is equal to the sum of the height of the buildings on either side. Apparently, this is similar to Saint Petersburg. Yeah, go Minsk! It is quite green too, to be fair; there are plenty public parks, although the ones in the centre don’t seem to be used much. 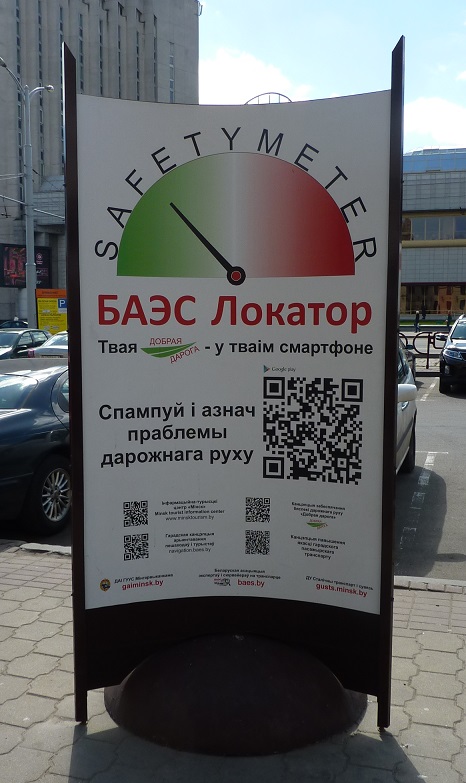 Clean? Yes it was; not much litter or air pollution, and safe. Oh yes, it is safe. It is safe because every second person is in military uniform. In fact, it is so safe that they have decided that the safety meter doesn’t need an adjustable arm to show you how safe it is: it is always really safe in Minsk, as proven by the safety meter! This delightful piece of modern art really put us at ease. 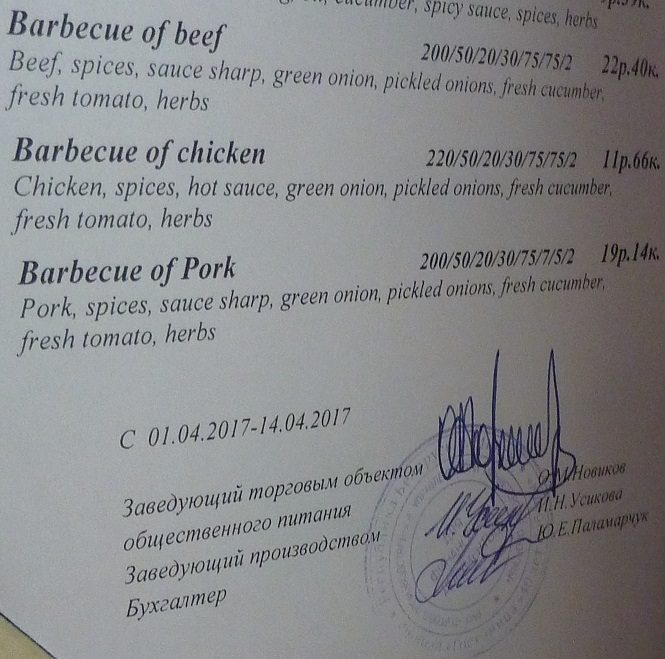 It would seem that the Belarusian national sport is admin. They love admin! From the queueing, forms and interrogation in the Belarusian embassy in Latvia to get the tourist visa to the heavily-controlled internet usage and this hilarious insight into the working of a Soviet state. Every menu in Minsk has a set of signatures at the bottom and an official seal. Note the weights of each ingredient: 2g of herbs? No, I’d rather go somewhere that will serve me 3g, and what if I get only served 1g? Luckily, I have the signature of three people about whom I could, presumably, complain to the officials.

There are, however, signs of change in merry old Minsk. Down the road from the crystal dome, they’re building themselves an international financial centre, just across from the welcome to Minsk road sign. 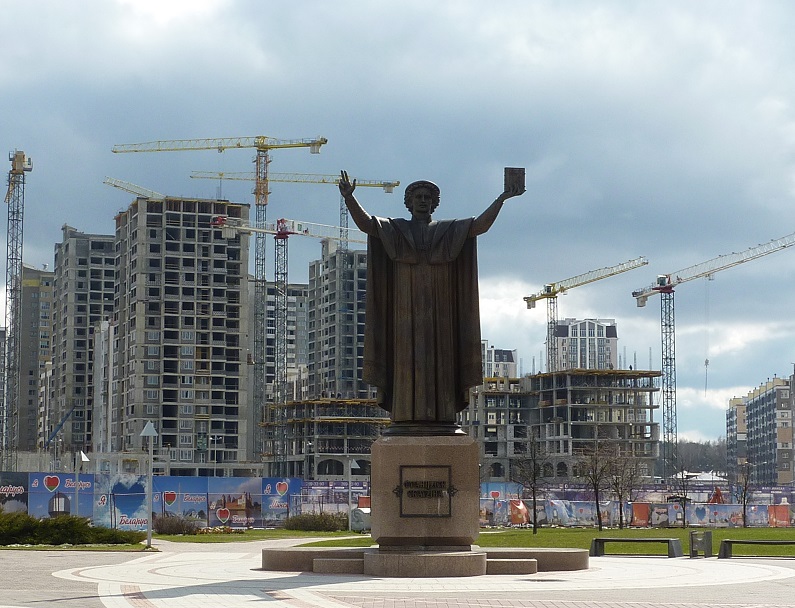 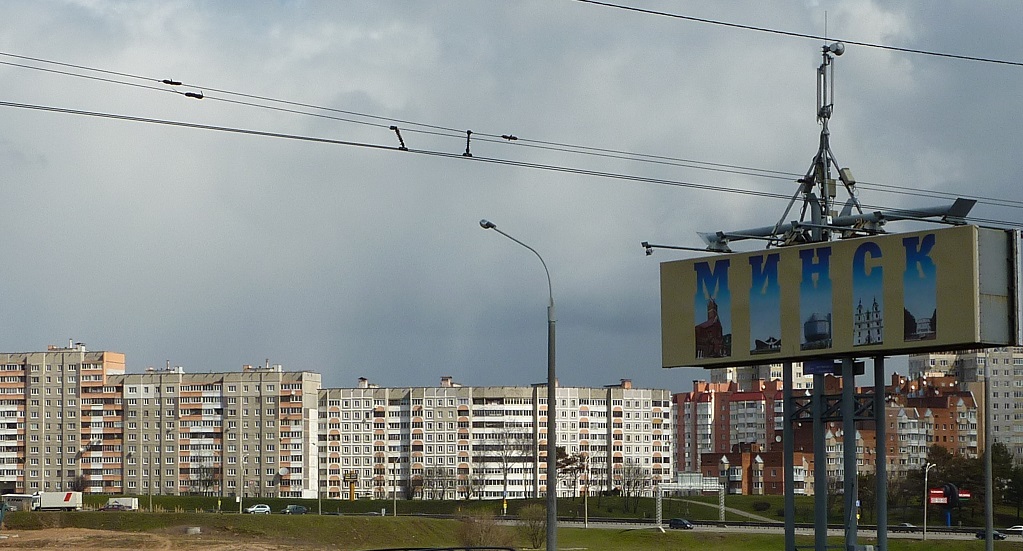 Something the Soviets have long been famed for (no, not electoral fraud) is ballet. Minsk hosts the Belarusian national ballet in this rather attractive place. This opulent opera house is an ode to the oligarchs and continues to put on good performances of pomp and ceremony for the local posh people and the tourists. With tickets starting from the price of a kebab, this is worth a look. 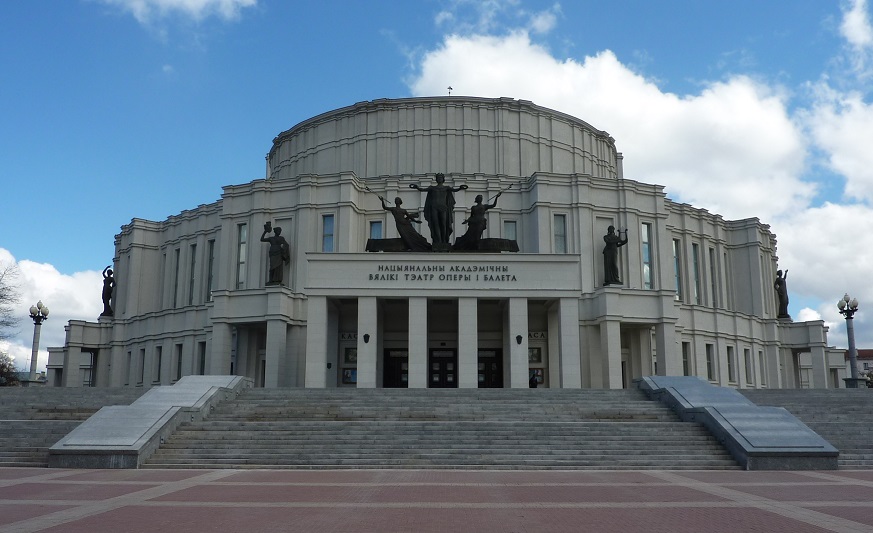 With cultural and business progress evident, the culinary scene is next up for scrutiny. Belarus has opened up a little in recent decades, as this delightful juxtaposition of KFC and KGB demonstrates. Overflowing with irony, the only colonel being defeated in this scene is downstairs, but the question of who won the war remains. 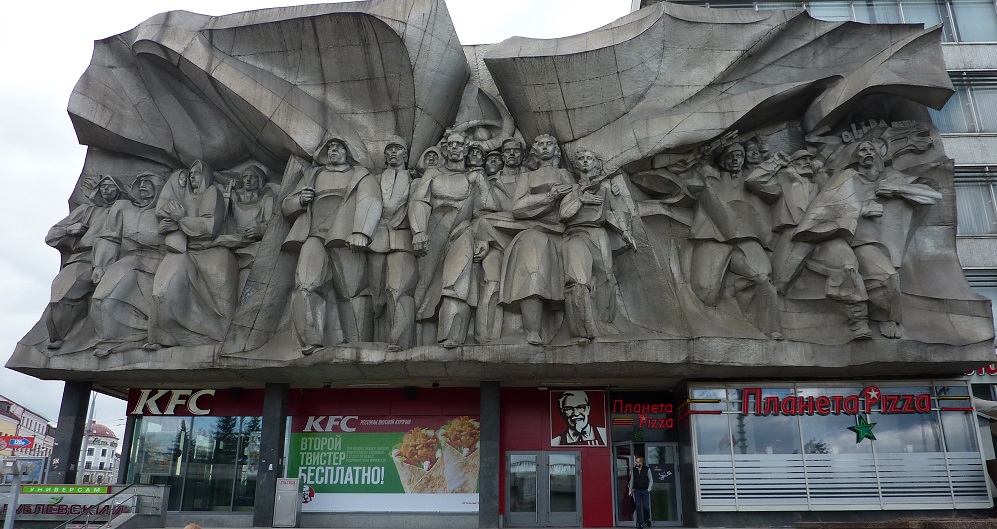 And with food on our minds, it was time to hunt down the kebab shop. In classic Minsk style, there is one option that appears to be available. On the magnificently wide Lenin street, looking very clean and safe, and with letters that make sense, it’s Gyros Grill!

This place was an upmarket establishment that was either cleaned by an army of OCD perfectionists, or had only recently opened. Perhaps the officials had heard that we were coming and built it specially, perhaps Belarus is turning us paranoid. 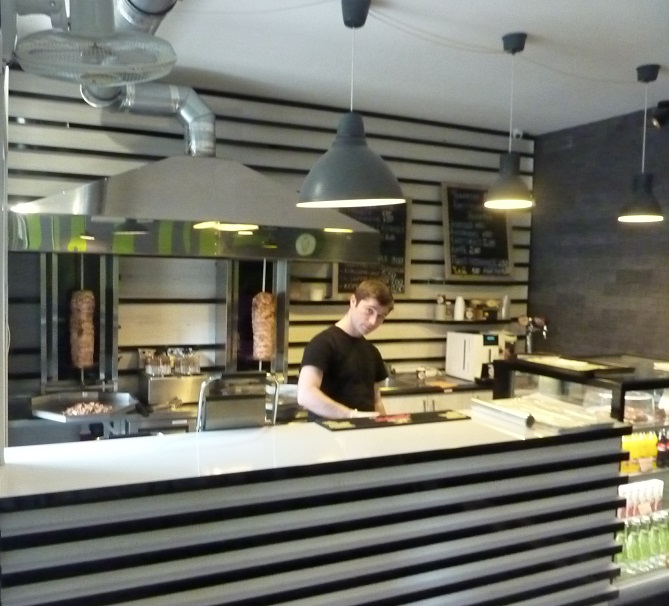 Either way, this shining example of style was clearly catering for tourists and rich locals who have grown bored of eating potatoes with dill. So, there was no queue and we ordered one of each of the ele-legs. 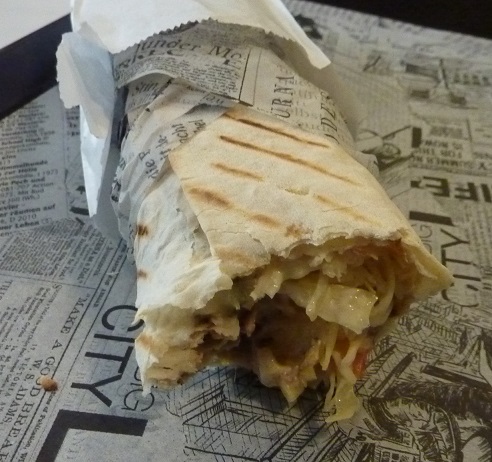 First impressions were good: it was big and bulging and the bread was slightly burnt, which actually gave it a nice charred flavour that made this one of the better breads so far.

It soon became apparent that this was another example of the Baltic and East European art of stuffing as much cabbage as possible into a kebab. A little hot sauce would have gone a long way, but, it would seem that the Belarusian efforts to open up to the international audience has not stretched as far as spice. In a pizza place we ordered the hot pizza, they warned us about it being hot, and it had a few jalapeno flakes on it: proper softcore. 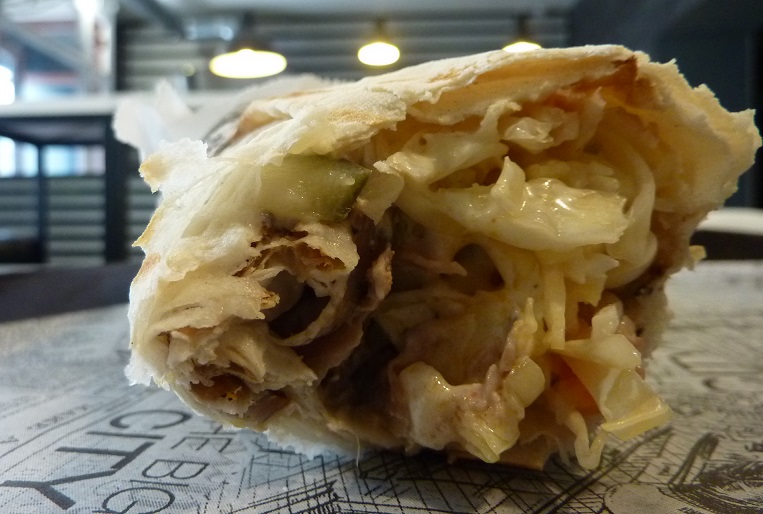 A couple of local flavours that mingled their way in to complement the cabbage were pickled gherkin and onion. A herby yoghurt-based sauce pervaded throughout to give a juicy, albeit slightly bland, kebab experience. The chicken and pork were both fresh and juicy and overall this kebab was a welcome sight, and a reasonable taste.

It wasn’t until we decided to take an arbitrary stroll away from the sights highlighted on our tourist map (obtained on day three as the tourist office closes for the weekend!), that we found out where the real life of Minsk is going on. To the north of the centre there is a humongous market where photography is strictly forbidden (which is weird, as it was just a load of market vendors... or was it?).

Outside, behind the market, we found the motherload. A meaty mecca that restored hope and faith in the future of Belarus: kebab shops.

The youth of Belarus had amassed around a bunch of kebab shops. The social glue that kept the spirits up and the hunger down was, for these Minsk youths, the noble kebab. With the world closing in and with the sweet smell of the future – and roasting meat – in the air, the next generation of Belarusians were standing around the spinning sticks of succulent pork and chicken. The winds of change were blowing stronger than ever and before we could go back down to Gorky Park, the kebabs were calling us once more.

The proprietor of this charming establishment had lots of questions, and unfortunately her English was like my Belarusian. Thankfully, a local youth helped out. 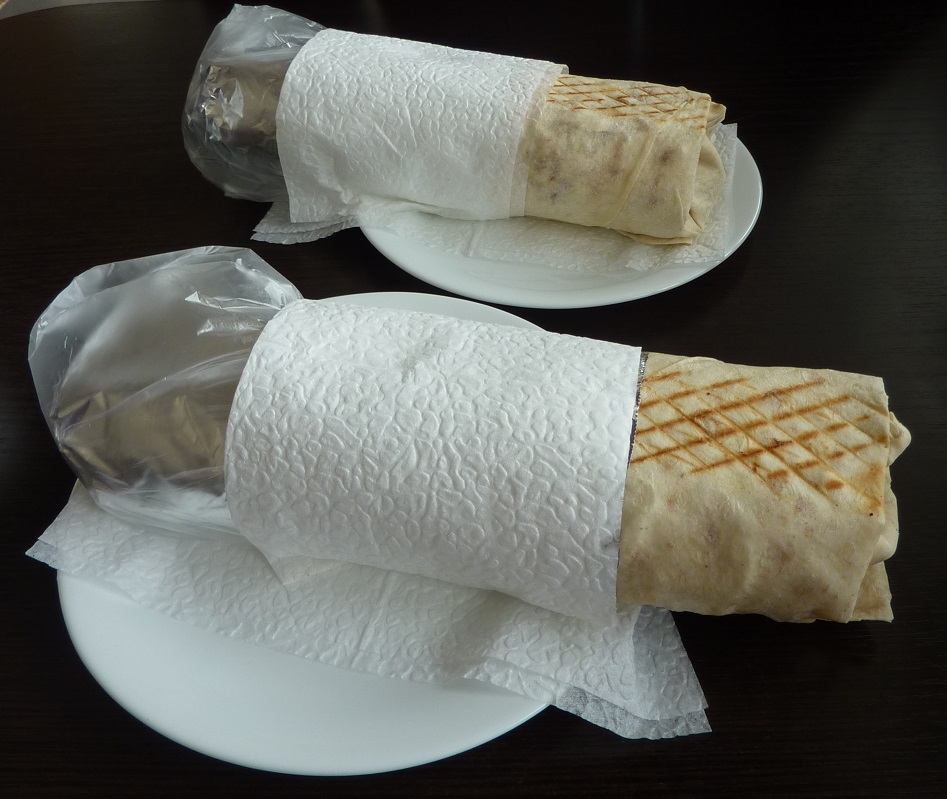 These were some seriously big kebabs. In the block of kebab takeaways and cafes that surround the market each vendor has one ele-leg each. Our chosen kebab café did chicken and it did it well. Juicy succulent chicken and, despite the mass of cabbage, this was tasty. Kate ordered a large falafel kebab, which turned out to be an error in many ways. 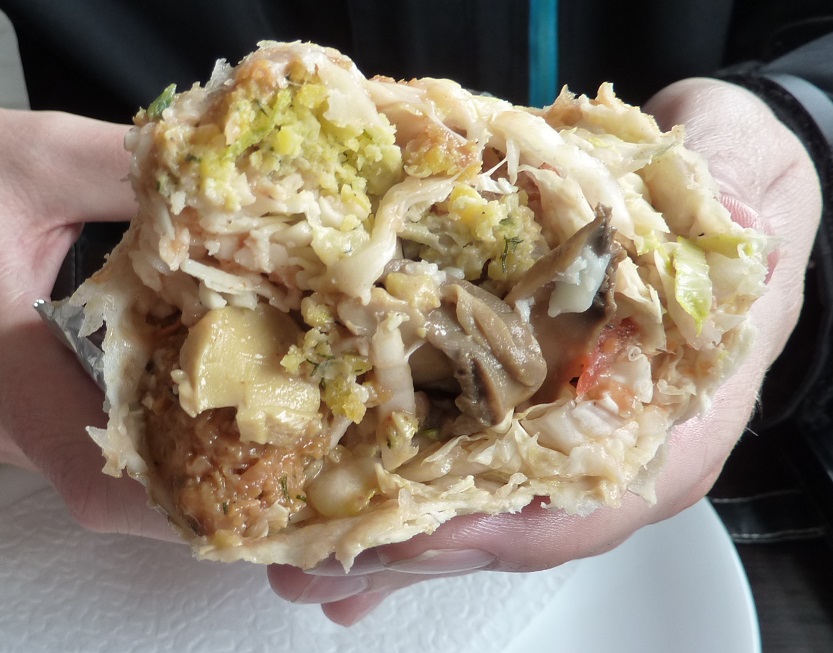 Firstly, it was huge. I mean, how much hedge can one girl eat? It was also a bit weird: very coarsely ground falafel that tasted nutty and dry. It looks a bit like dried vomit, but tasted nice enough. The final trick up the falafel kebab’s sleeve was the mushrooms: many people’s highlight, Kate’s demise. If you have a mushroom allergy, like Kate, then you are basically screwed at this time of year in Belarus as they are everywhere and this falafel kebab was no exception.

One cultural observation from both the Belarusian kebab shops is the availability of beer. It seems that the British lack of draught beer in kebab shops leaves us lagging behind our Belarusian brothers. Minsk has pound-a-pint lager to provide the perfect partner for your pork and pickley cabbage kebabs.

And the scores for Belarus kebab:

Next up we leave the completely barmy land of Belarus behind and say thank you for the memories as we head over to somewhere a bit more European and a bit more 21st century. Hello Ukraine!